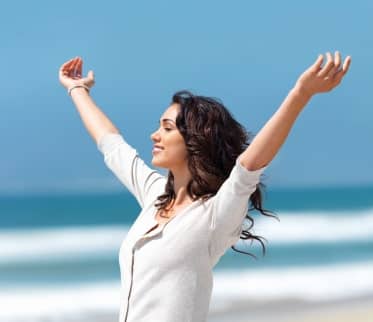 Ah, to be in a good mood and feel great about yourself!  Imagine if you could find a way to achieve those feelings nearly everyday? Well you can with natural serotonin boosters.

Serotonin is a neurotransmitter that improve our mood and controls our appetite. Natural serotonin boosters include tryptophan and 5-Hydroxytryptophan (5-HTP) among others.  Consumption of high quality protein is the key to serotonin production. Thus, vegetarians are at risk for developing a serotonin deficiency.

Serotonin is sometimes known as the “happy hormone”.  Low levels of serotonin are associated with the glass is half-empty attitude, depression, increased appetite, PMS, dislike for hot and/or dark weather, worry and anxiousness, irritability, panic attacks, and difficulty sleeping.

Satiety occurs when serotonin levels are optimal. Though protein is essential for serotonin production, serotonin deficiency leads to carbohydrate cravings which do raise serotonin but lead to excessive weight gain in the form of fat as insulin levels rise in response to carbohydrates.  Binging on carbohydrates is the body’s way of telling you it’s low in serotonin.

Why does eating carbs increase serotonin? Tyrptophan, an amino acid and precursor of serotonin, competes with other amino acids to be transported into the brain.  Carbohydrates stimulate the production of insulin causing muscles to take up the other amino acids leaving tryptophan free to enter the brain and produce serotonin.

Why Does Serotonin Become Low?

But, the biggest reason is probably nutritional. Intake of adequate amounts of tryptophan from the diet are lacking in many suffering from low serotonin levels. Plus, tryptophan is the least abundant amino acid in the diet in part because of the corn-feeding of animals.

Some nutrients rob our bodies of serotonin and include caffeine, ephedrine, mu huang, diet pills, and other stimulants. Another enemy is aspartame or NutraSweet®. Deficiencies in calcium, magnesium, vitamin D, and the B vitamins also limit the production of serotonin and the other neurotransmitters.

Tryptophan is an essential amino acid, which means the body cannot synthesize it on its own. It is the key nutrient in natural serotonin booster foods. The best sources of tryptophan are:

Be sure to include these serotonin food boosters in your diet. Consume meats/poultry that have been grass-fed rather than corn-fed as they contain higher levels of tryptophan.

Tryptophan can also be taken in the form of a supplement. Doses of 500 to 1500 mg of tryptophan once or twice a day in mid-afternoon and before bed is recommended.

Tryptophan gets converted to 5-HTP, which then gets converted to serotonin.  5-HTP is available as a nutritional supplement, and seems more effective than tyrptophan in managing depression.  5-HTP is the immediate precursor of serotonin.  Doses of 50 mg to 400 mg a day in divided doses can be effective for improving sleep, and treating depression and anxiety. Taking it 2 or 3 times a day is important and it’s helpful to take them if/when you have cravings for sweets. High carbohydrate snacks can raise tryptophan levels, but they are full of empty calories and raise insulin levels.

5-HTP has been shown in some studies to raise serotonin levels better than prescriptions medications, the SSRIs. It’s recommended that you take either tryptophan or 5-HTP. You do not need to take both.

What Else Can Be Done to Boost Serotonin Levels?

Sun exposure and/or use light therapy, and exercise will boost serotonin levels.  Stress reducing techniques like meditation are helpful in raising serotonin levels by lowering cortisol levels.  Vitamin B6 is an important co-factor in the production of serotonin.  Be sure to get 50 mg to 100 mg a day if you suspect low serotonin levels.  See “Anti Aging Vitamins“.

These are the natural ways to increase serotonin.

How Blue Light Harms Your Health

How Blue Light Harms Your Health